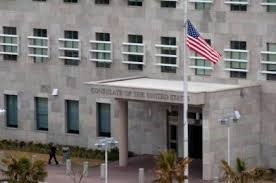 With an Embassy, seven Consulates General, and two Consulates, Mission Mexico has the largest consular operation in the world. There are over one million legal border crossings daily, one million American citizens resident in Mexico and over twelve million American citizens visiting Mexico for business or tourism each year. Two Hundred and six consular officers and 485 locally engaged staff provide consular services in Mexico. Almost one out of every five new Foreign Service Officers works in Mission Mexico’s consular section. Our new Consulate General office compound in Ciudad Juarez is the largest consular operation in the world. Specializing in immigrant visa processing, this facility adjudicates over 10,000 green card applications each month. http://mexico.usembassy.gov/eng/eataglance_consular.html

U.S. Citizen Consular Services
Assisting our ten consular posts, 14 consular agencies provide passport and other services to American citizens in Mexico. About 50,000 American citizens came to the Embassy or one of its nine consulates and fourteen consular agencies in Mexico for assistance during the past year. Services provided include passport issuance, reports of birth and death, notarizations, and others. The Embassy also provides assistance in case of natural disasters and in the past few years has responded to numerous hurricanes, tropical storms and the H1N1 influenza epidemic.